Robert Nalley, Metal Fabricator at AquaPhoenix, sat down to discuss his approach to custom builds and may surprise you with his favorite food.

Q: What is your role at APS?

My name is Robert Nalley and my role at AquaPhoenix is welder and metal fabricator. How long have I been here? I tend to lose track. I think it's 13 or 14 years. I think I'm going on year 14.

Q: What has been your favorite project?

I don't have a single favorite project. What I like are the prototypes. So when somebody just gets an idea. There's no CAD drawing; it's a pencil sketch on a napkin at best and we start a collaboration on how to build it. And you start grabbing scraps and building a prototype and stuff like that. That's what gets me excited. That's where creativity comes into play and you know you get to build something that nobody else is doing, right.

Q: What has been your most embarrassing moment at APS?

So there's actually quite a few embarrassing moments but you can roll them all into one because the building next door it has a habit of splitting people's pants. I personally have had to run to Walmart twice to get a new pair of pants just in the past two - two and a half years. And I know it's happened to Jeremy and a couple of the others next door as well.

Q: What advice would you give to a new hire?

The basic thing with a new hire as far as advice would be you just gotta stick it out. Stick the newness out because every new person has a huge learning curve and you're not going to be the new guy forever. So once you just stick it out that first 60 or 90 days, you're going to feel comfortable and right as rain. 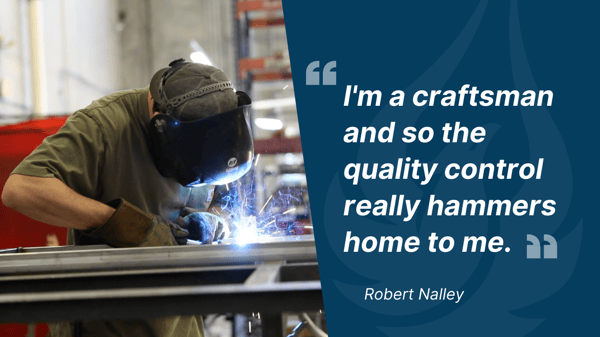 Q: If you could learn something new, what would it be?

Q: What is something most people don't know about you?

Well, a lot of people know I like to smoke barbeque. What they don't know is I like to cook pastries also. You can't have a main course without a good dessert.

Q: Any favorite line from a movie?

Q: Which AquaPhoenix Core Value Stands out to you?

The core values I like the most would be safety, quality control, and customer service. And that's because I'm a craftsman and so the quality control really hammers home to me. I like customer service because well I know a lot of our customers. I've been here long enough they know me by name. I used to work with a lot of our customers. And then safety; everybody goes home the same way they came into this building, right. Ten digits, ten toes and we're all breathing. So that line, I dig it.

Q: What is your favorite food?

My favorite food. I know a lot of people are expecting me to say barbeque. It's actually fish sticks. Every year for my birthday I get 50 fish sticks and it's been like that since I was about yay high.

Q: Do you have pets?

I have one, most people would call a pet, I call her my daughter since I don't have a daughter. But I have a dog, Lucy. She's going on eight and a half years - nine years now. She's half red heeler half lab. And I also work with a heeler rescue. On weekends, I'll do transporting of heelers; pulling them from shelters, getting them to vets, and stuff like that.